Did you miss the world debut of an original design by Kurt Wenner, artist and innovator of 3-dimensional Pavement Art during the Sarasota Chalk Festival in April? No worries, we are installing this complicated illusion again at the November festival with added features. Simply purchase any festival ticket, from Nov. 15-18th to experience this amazing installation. Kids under 12 go free.

The Wenner Illusion Environment is an original invention that uses perspective geometry to visually distort real people and objects as they appear to grow and shrink in size. From one point of view Wenner's artwork will make flat surfaces appear to fall into space and curve into vaults. The laws of gravity are suspended as water can flow uphill.

The Sarasota Chalk Festival debuted this complicated invention for the first time in April.

The Wenner Illusion environment is a unique anamorphic distortion of Cartesian spatial geometry. The object of this invention is to provide an optical illusion device that can contain people or objects. When viewed or photographed from the selected viewpoint, the environment appears symmetrical and modular, but the apparent sizes and relationships of real objects or people contained within it appear distorted. The originality of the Wenner Room lies in the fact that the illusion takes place in all directions.

The Wenner 3-dimensional illusion environment combines the vertices of four rectangular solids of identical aspect ratios, placed in a consistently spaced geometrical progression from the selected viewpoint so that all the vertices align on the same sight lines. The resulting polyhedral shape has two irregular polygonal faces, four trapezoidal faces and no rectangular faces. The complexity of the project is further enhanced by the artwork, which adds Wenner’s signature anamorphic perspective geometry to the illusion.

Kurt Wenner attended Rhode Island School of Design and Art Center College of Design before working for NASA as an advanced scientific space illustrator. In 1982, Wenner left NASA for Italy to pursue his love of classical art.

While based in Rome, Italy Wenner studied the works of the great masters and drew constantly from classical sculpture. The drawings he made brought him in touch with the language of form in Western figurative art and provided him with the neoclassical training necessary for the style he was pursuing. Through his studies he became particularly interested in the Mannerist period; finding in the monumental scale and sophisticated decoration a direction for his own artistic expression. For several years Wenner traveled extensively in order to experience firsthand most of the major masterpieces and monuments throughout Europe. During these first years abroad he experimented with traditional paint media such as tempera, fresco, and oil paint. In order to finance his travels and studies he became a madonnaro and created chalk paintings on the streets of Rome. Within several years he won numerous gold medals at European competitions and become officially recognized as a master of this art form. In 1985 his work was the subject of National Geographic’s award-winning documentary Masterpieces in Chalk.

Eventually, Wenner’s knowledge of Renaissance classicism provided a foundation for his own art, as well as material for numerous lectures and workshops given throughout the US. A firm believer in arts education, Wenner taught more than a hundred thousand students over a 10-year period and received the Kennedy Center Medallion in recognition of his outstanding contribution to arts education. In addition to teaching, he has lectured at corporate events and conducted seminars and workshops for organizations ranging from the National Gallery of Art and the Smithsonian Institution to Disney Studios, Warner Bros. Studios, Toyota, and General Motors.

In 1984, Wenner invented an art form all his own that has come to be known as anamorphic or 3D pavement art. A form of perspective, known as anamorphism was used by the great European Masters to give the illusion of soaring architecture and floating figures in ceiling frescoes. Inspired by this use of perspective, Wenner invented a new geometry to create compositions that appear to rise from, or fall into the ground. In traditional anamorphic perspective painted forms appear correct when viewed from one point in space. Wenner’s geometry corrects the specific distortion caused by viewing his large images at an oblique angle. This type of geometry has come to be known as Wenner’s hyperbolic perspective. Every work of figurative art, even a picture in a frame, employs some illusion. The two major types of illusion are conventional and optical. A framed picture is a conventional illusion. The viewer can choose to see the frame as a window, a starting point from which to visually enter the painted world. This is referred to as “a willing suspension of disbelief.” The frame can also be a border, safely separating the real world from the imaginary. The viewer recognizes the work as a painting on a wall long before looking at the subject. Optical illusions blur the distinction between the real and the  imaginary, literally fooling the viewer (trompe l’oeil). 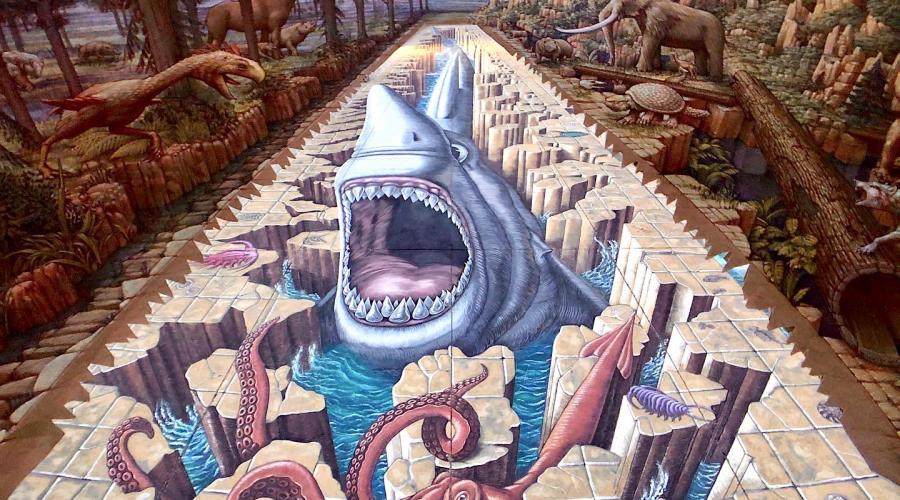 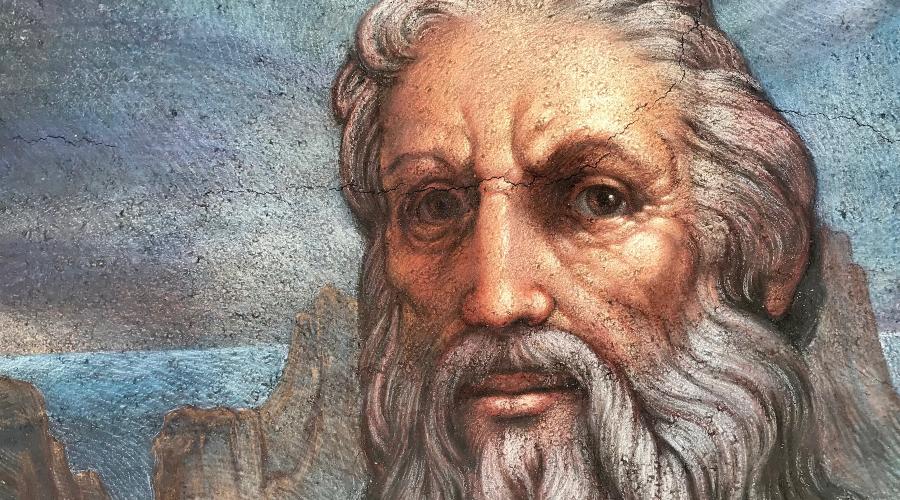 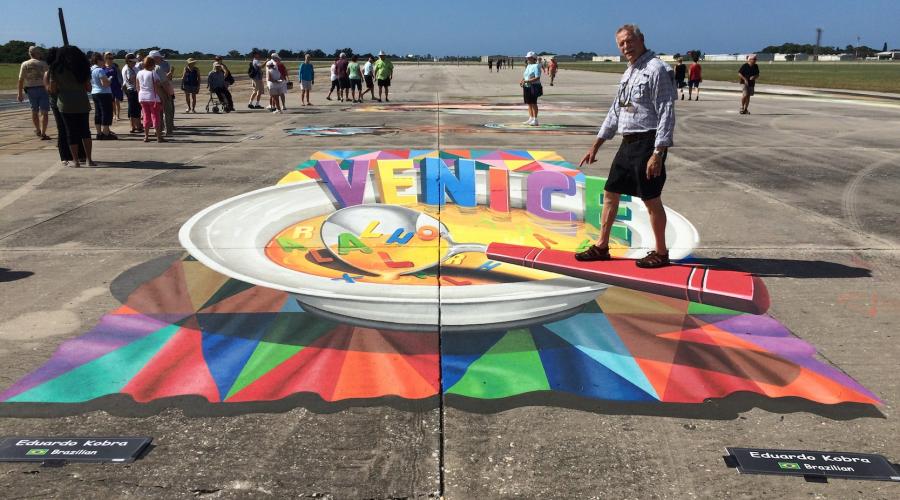 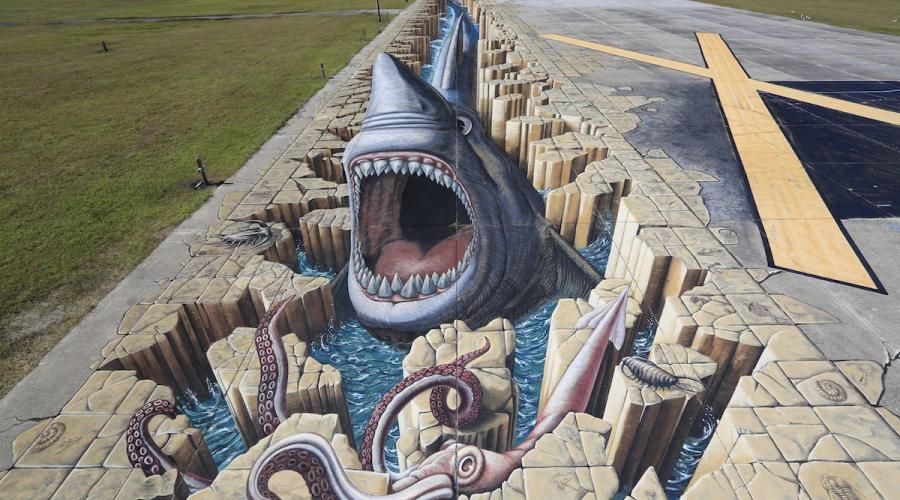 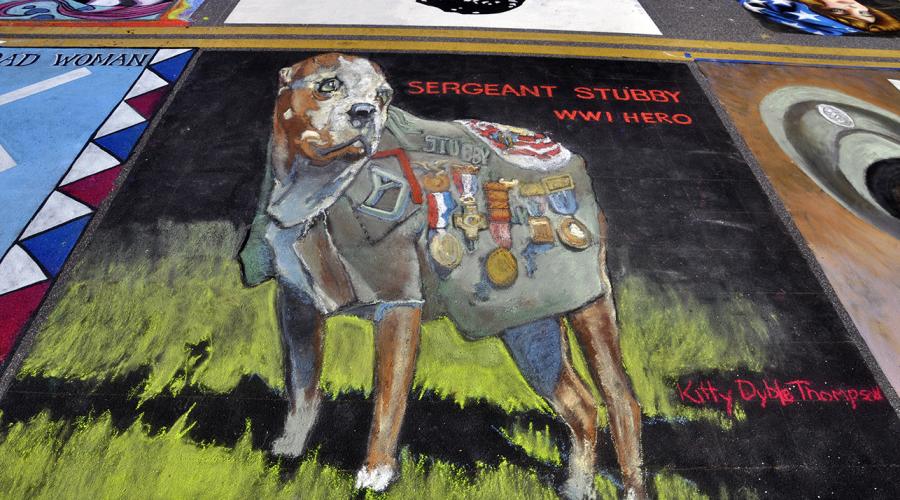 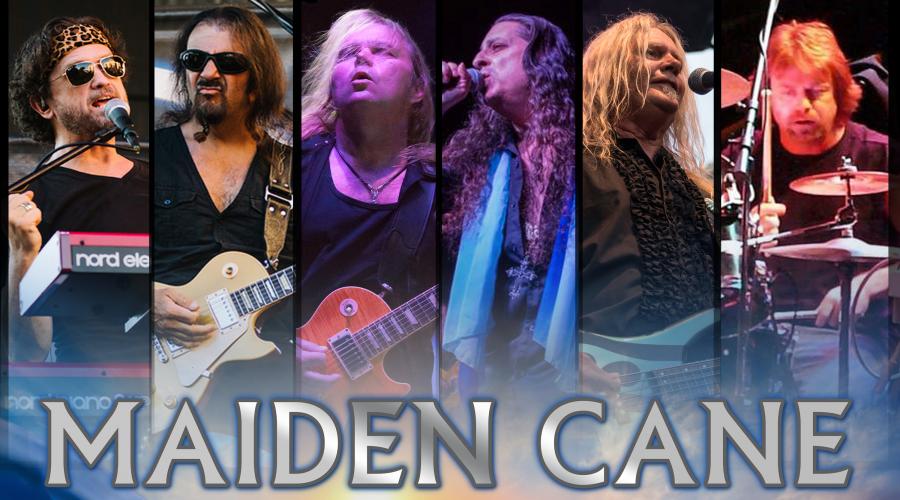